Home In The News At Home, Off the Grid 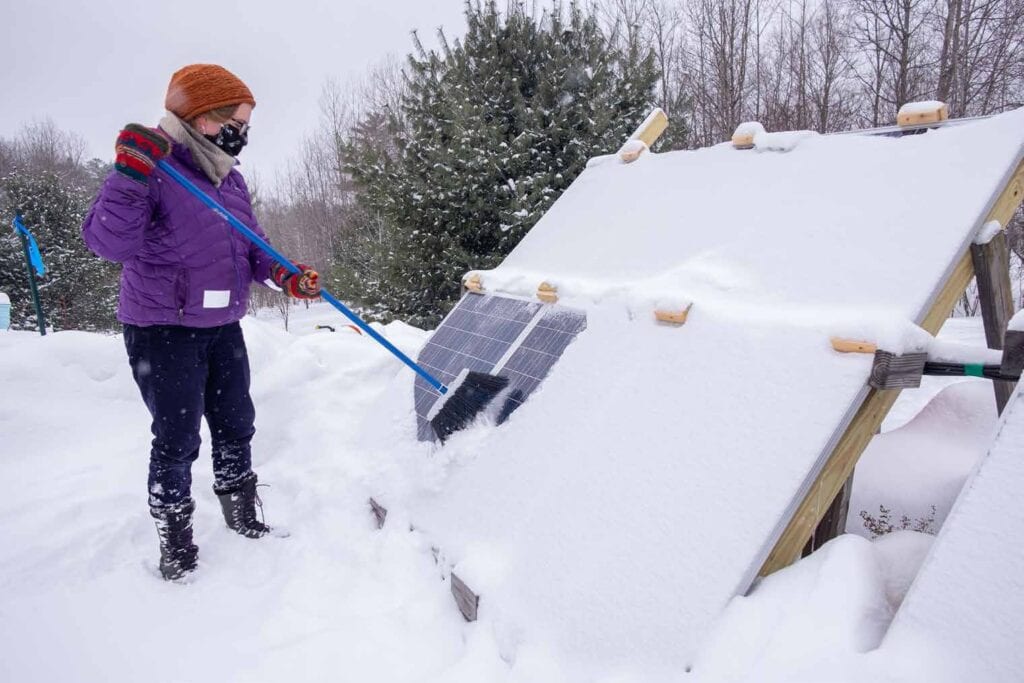 Sharon resident Nicole Antal, who has been living off-grid since 2015, clears off her home’s solar panels after a round of heavy snow last week. (Herald / Dylan Kelley)

As the ongoing pandemic continues to have profound effects on the way we live and work, some area residents have been digging further into a lifestyle that emphasizes self-sufficiency and resiliency.

While off-grid living is nothing new, the growing urgency of climate change and, more recently, fears of the COVID-19 pandemic have driven more people to consider a lifestyle disconnected from the energy grid—a change that brings plenty of hard work and, as the owners of two area homesteads assert, a greater degree of self-determination and connection with the land.

On the outskirts of Bethel, there’s a sloping driveway that wends its way upward from Macintosh Road and through the trees. Here, Carl Russell and Lisa McCrory operate Earthwise Farm and Forest, an organic farm and lumber yard that has been running off-the-grid since its founding in 2000. 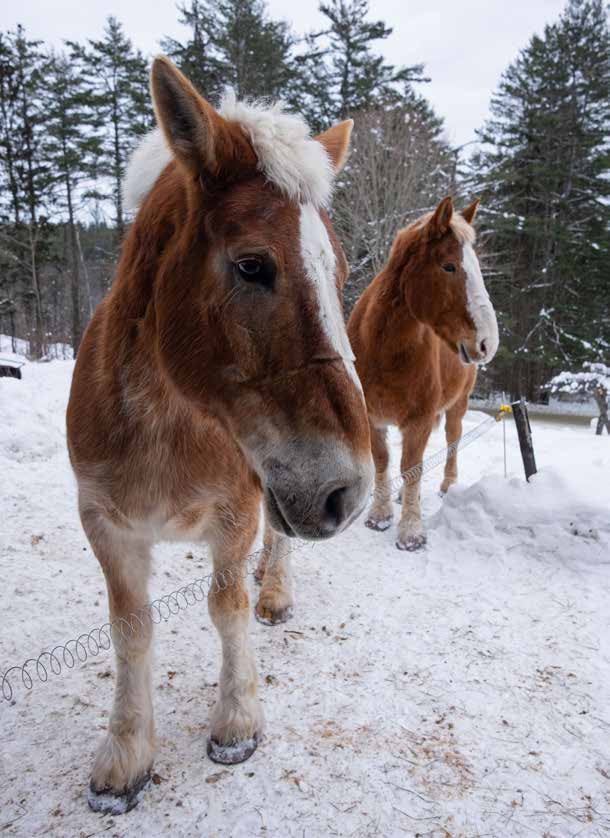 Draft horses Mike and Tom greet visitors to Earthwise Farm and Forest, an off-grid organic farm where owner Carl Russell has been using draft animals to work the land since the 1980s. (Herald / Dylan Kelley)

Married in 2001, Russell and Mc- Crory quickly began the process of building their home using draft horses to harvest timbers from the surrounding forest to construct their unique, eight-sided house that would rely on little more than the woods nearby and a few solar panels to meet their energy needs.

“When Lisa and I decided to build here, we wanted to try to incorporate conservation—not only in the way we ended up living in the home, but in the way that we harvested the material and developed a home,” said Russell, who spoke at length about different approaches to moderating energy consumption.

“It was [a process of] trying to come together with an idea of these different systems that we could try to control through conservation.” These systems, he explained, are embedded into nearly every aspect of the home. Instead of drilling a well nearby, the pair hired a dowser to find a well on the hillside above to provide gravity-fed water. Rather than installing a toilet and septic system, Russell and McCrory opted for a composting toilet to recapture nutrients and limit water consumption. 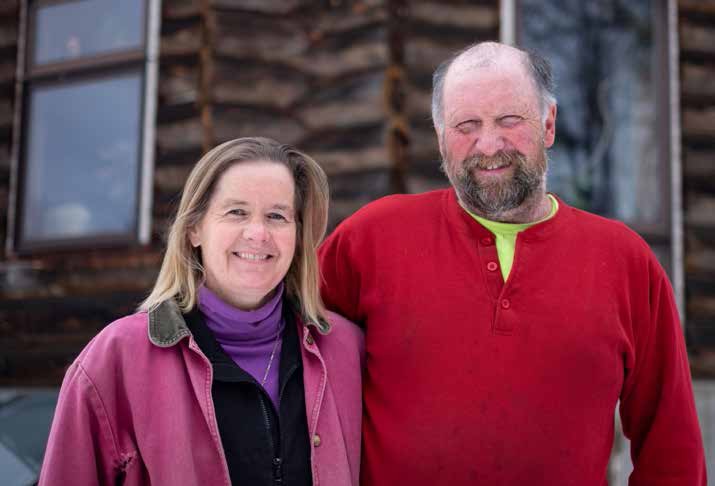 Lisa McCrory and Carl Russell at their off-grid home in Bethel, where they’ve been living and operating Earthwise Farm and Forest together since the early 2000s. (Herald / Dylan Kelley)

And where others might use a water heater, their home relies on the wood stove for hot water during wintertime and a simple outdoor solar exchanger during summertime, they said.

Where electricity is needed, McCrory and Russell avoid using any appliances that carry a “phantom load,” which draws power from even when not in use. To get around the chore of constantly unplugging items, the pair use power strips to cut all power to their outlets at the flick of a switch.

Each of these modest innovations, they explained, focuses not on efficiency but on limiting consumption, even if it means sacrificing convenience along the way.

Explaining that their electrical system is deliberately designed to just meet their needs without producing excess energy, Russell said “there are days when it’s not enough,” but that, as a result, the family is able to be more aware of their usage.

“We did, at point in time, get a calculation on energy consumption as a family,” he said. “We were one sixth the average American household.”

But while these systems and adaptations designed to limit consumption may paint an image of an unusual home, McCrory admits that the process of living off-grid is actually far easier than she had anticipated, noting that some visitors are surprised to learn that the house is off-grid.

The concept of energy and nutrient conservation also extends to their diversified farm operation, which forgoes trucks and tractors for draft horses—a critical aspect of their operation, McCrory said.

“They’re keeping this farm alive by recycling nutrients— what we graze and what we feed them turns into a nutrient source that we put back on the land,” she said. “Without the livestock we wouldn’t have a vibrant farm.”

Elsewhere on the farm, technology is avoided and almost everything is done by hand, including plucking poultry, milking cows, and cultivating vegetables, Russell and McCrory said.

“If you require a technological advancement that requires a good energy source … then you have to keep reaching outward because you’re potentially compromising your own autonomy by being reliant on design and power and maintenance of [those] systems.”

Maintaining autonomy through small-scale cultivation, McCrory said, is a key to maintaining a connection with the land and also creating a good place to raise their children over the years.

If the farm were to grow larger, McCrory argued, the operation would be forced to prioritize turning enough of a profit to pay operating costs, rather than concentrating on its contributions to the landscape.

“Then all of a sudden we’re no longer autonomous because we’re not living for ourselves,” she said. “[We would be] living for paying off a debt or feeding a market.”

One aspect of connectivity that, Russell admitted, has not been sacrificed is access to phone and internet services. Explaining that they’ve had a telephone landline extending up the hill to their house since the early days of Earthwise, Russell explained that the home’s DSL internet connection represents a relatively low burden of power consumption.

“My estimate is that if you’ve got both computers plugged in with a charger, and maybe an extra screen, and a printer is plugged in—they don’t use much more power than a couple of light bulbs,” he said. “A digital clock probably uses more power than our computers.”

Though he maintains some level of conservation-minded skepticism about the necessity of such a heavily networked system become so deeply integrated into daily life, Russell believes, when it comes the community organizing and advocacy practiced by both him and his wife, that the World Wide Web is a net positive, even at Earthwise.

“Right now, with the social issues we have about connecting to, observing, and learning from other cultures, I think [the internet] is really huge,” he said. “It definitely has some assets.”

Looking ahead, both Russell and McCrory agree that their view of stewardship extends well into the future, to a time when their children or grandchildren may one day take over the farm and homestead.

“You’ve got try to leave enough on the table so the next people can utilize these systems as a base, but that they’ve got choices that haven’t been prescribed,” said Russell. “That’s the hidden feature [of this place] for the next generation—it’s here for them as it’s here for me.”

On another hill, in a different portion of the White River Valley, another off-grid homestead has slowly taken shape.

With an eye on affordability and resiliency, Nicole Antal and her husband, Ben Servoz, have been slowly building and adding to their off-grid homestead in the hills of Sharon.

“We knew we wanted land, so we bought 50 acres,” Antal said. “We couldn’t do both. We couldn’t have land and a house, so we chose land over housing.”

With just $6,000 to work with, Antal and Servoz spent the summer of 2015 constructing the first iteration of their off-grid home—a 456 square-foot cabin for themselves and their son, Robin.

“[It was] very basic, a very small cabin, no electricity or anything,” she remembered. “It was mainly just a shell.”

Recounting that they had to save over the course of the summer in order to later buy the insulation needed to winterize the cabin, Antal said the house was far from finished and even lacked insulation until late in the summer.

“We’re still on that model of building as money comes in,” she laughed, noting that she hopes the two-story house, which has since grown to roughly 1,100 square feet, will be finished by her 80th birthday. “It’s never going to be done. We keep talking to people [who say] you’re never done with the house you build yourself—there’s always new projects.”

Since that first summer, Antal and Servoz have added electricity through the installation of several solar panels in their front yard, LED strip lights to illuminate the house’s interior, a wood stove, and— as of this month—indoor running water that doesn’t require them to gather it from a pump well that sits a few yards from their front door.

“Walking the water—it definitely makes you appreciate every drop you have,” Antal said as she weighed her family’s priorities aloud. “Funny enough, water wasn’t one of them for five years,” she laughed. “You’d think it would be, but we found processes that work.

“This summer we were able to take outside showers,” she added, “which is super nice.”

For the most part, Antal explained, her home is built with traditional building materials that can be found in any other home—including weatherized windows, insulation, wiring, and cozy furniture.

“I used to say that the only thing untraditional about our house is that we can’t leave the house in the winter, but [lately] this has been true for everyone,” she said. “We feed the fire all the time, even at night when it’s below -18 Celsius, we need to wake up a few times a night.”

One aspect that has been a bit persnickety is internet access, Antal said, noting that she and her husband have upgraded to ECFiber after having connectivity issues when using satellite or phone-based internet services.

“Connectivity has evolved,” she said. “Internet is sometimes down, when we don’t have enough power, but as with everything else in our lives, we are okay with it and expect it not to be always working.”

Explaining that “the goal is to be resilient,” Antal said that off-grid living was simply the most affordable path forward, particularly when she had to quit her job when her son was diagnosed with diabetes at age two.

“It was about how to live without having to rely on two incomes—so one of us could stay home with my son,” she said. “And then, of course, once you slow down, you realize the simple things in life.”

Now, with the expansion and electrification of the house, the planting of numerous fruit and nut trees, and the birth of her daughter, Esther, Antal said she was devoting her more of her time to develop her hand-made soap business and growing more food. 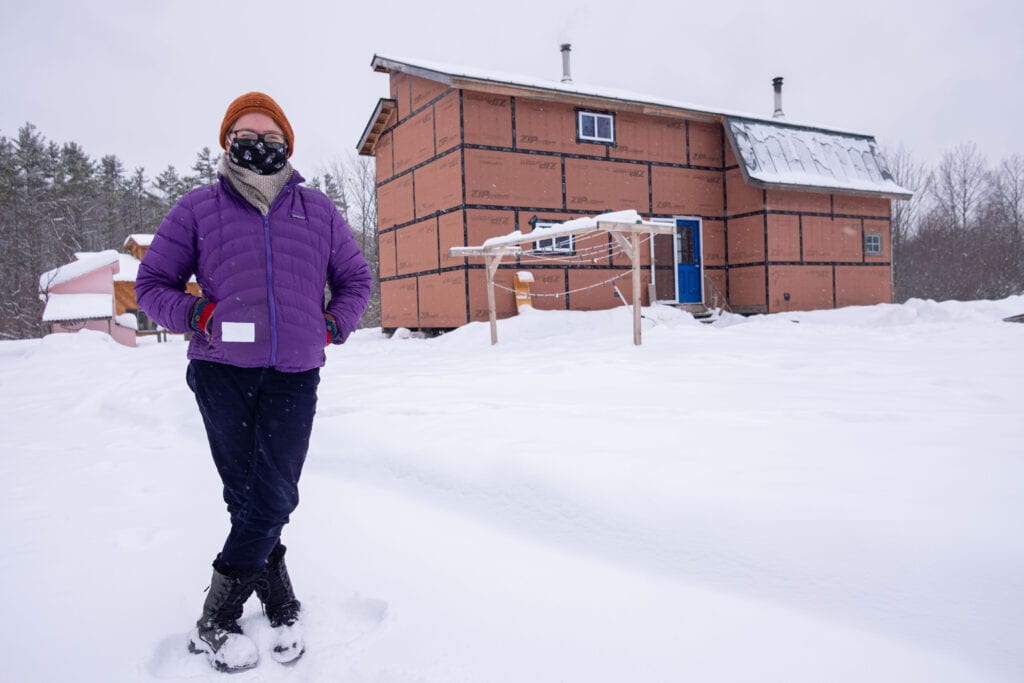 “It comes back to resiliency, being not as anxious about what’s happening in the world and knowing that we will be fine,” she said, noting that her concerns about climate change also played a large role in deciding to go off-grid. “I just need to know that, at least, we’ll be fine and my community will be fine if we do all these things—and we’re working towards that goal.

“It’s also fun,” she laughed. “We’re not doing this just because we’re afraid for the future— it’s also fun.

Essentials to Build Your Way Into the Off-Grid Life

Why Now Is the Time To Buy a Tiny House

This ultra modern tiny home comes with a full-sized kitchen and high ceilings to make it feel anything but tiny!